On November 5-6, 2010 DePaul University in Chicago, IL hosted the inaugural 2010 Critical Mixed Race Studies (CMRS) conference “Emerging Paradigms in Critical Mixed Race Studies.” We had over 450 people registered and 430 people actually showed up from all over the U.S. from Hawaii to Tennessee to New York as well as scholars from Canada, Korea, and the UK. The programming included 62 sessions of panels, round tables, and seminars; multiple film screenings, keynote addresses by leading scholars Mary Beltran from University of Wisconsin-Madison, and Andrew Jolivette from San Francisco State University, and community activist and artist Louie Gong from MAVIN and Eighth Generation; a Mixed Mixer social event with live jazz music; a performance by comedian Kate Rigg; an Informational Fair; a Book Table; Caucus and Business meetings.
Many panels were standing room only or at capacity. We were honored to have senior scholars present at CMRS including: Kent Ono, University of Illinois at Urbana-Champaign; Stephen Murphy-Shigematsu, Stanford University; G. Reginald Daniels (via SKYPE), University of California at Santa Barbara; Ranier Spencer, University of Nevada at Las Vegas; Michele Elam, Stanford University; and Richard Lou, University of Memphis. Representatives from community organizations came out in full force from: MAVIN, SWIRL Inc., Mixed Roots Film & Literary Festival, Multiracial Americans of Southern California, Lovingday.org, and the Biracial Family Network. A strong contingent of undergraduate and graduate students from DePaul University and area colleges and a surprisingly high number of graduate students from across the country joined us as well.
When Camilla Fojas (DePaul University), Wei Ming Dariotis (San Francisco State University), and I initially envisioned this conference back in 2008 at a multiracial leadership retreat outside of San Francisco, we thought CMRS might be a small gathering of 50 or so academics. We were blown away not only by the number of people who showed up but also by the level of energy. I saw a lot of people there from the 8:30am welcoming remarks on Friday am all the way through the 10pm Saturday night closing event! I kept hearing people talk about what a legitimizing experience this was for them both on a personal and professional level.
We want to thank everyone who participated in making CMRS 2010 happen and we are looking forward to the next steps for Critical Mixed Race Studies: founding an association and a peer reviewed online journal; planning for CMRS 2012 at DePaul University and CMRS 2014 (hopefully at the University of Washington); looking for ways us to continue to stay in touch virtually (listserv, dedicated website); and ways to keep the momentum going for CMRS for 2011. There is a lot of work to do and we’ll be sending out the business minutes shortly with ways for you all to get involved.
Following the conference, a colleague challenged me to describe what Critical Mixed Race Studies is in layman’s terms. My best attempt for now is, “Critical Mixed Race Studies focuses on multiracial, interracial, and transracial adoption populations and is concerned with social justice.” My co-organizers and I came up with the following “academic” definition back in 2008:
Critical Mixed Race Studies (CMRS) is the transracial, transdisciplinary, and transnational critical analysis of the institutionalization of social, cultural, and political orders based on dominant conceptions of race. CMRS emphasizes the mutability of race and the porosity of racial boundaries in order to critique processes of racialization and social stratification based on race. CMRS addresses local and global systemic injustices rooted in systems of racialization. 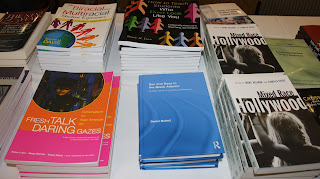 and now for the CREDITS:
ORGANIZERS
I first want to thank my fellow CMRS organizers WEI MING DARIOTIS, Assistant Professor Asian American Studies San Francisco State University, and CAMILLA FOJAS, Professor and Chair Latin American and Latino Studies.
HOSTS
We wish to especially thank DePaul University Department of Latin American and Latino Studies and the Global Asian Studies program for HOSTING the inaugural 2010 CMRS conference. We are deeply indebted to the countless hours MARÍA ISABEL OCHOA and CRISTINA RODRÍGUEZ put in to make sure all the big and little details for the conference were covered. We also want to thank MAYRA ALANIS, JOVANI PEREZ, ANTHONY RODRÍGUEZ, and CESAR ALANIS of the Latin American and Latino Studies and Center for Latino Research and ELIZABETH LILLEHOJ and KENJI TRAN of the Global Asian Studies. None of this would have been possible without the continued support of the Dean of Liberal Arts & Sciences, Dean CHARLES SUCHAR.
CO-ORGANIZERS/PARTNERS
We would like to thank our partners MAVIN for helping spread the word about CMRS far and wide and MAVIN’s ERIC HAMAKO, AMANDA EREKSON, JENEE JAHN, MONICA NIXON, and THERESA RONQUILLO for organizing workshops for this year.


I have to give a special shout out to KATRINA CALDWELL and LAILA MCCLOUD of the Center for Intercultural Programs for sponsoring and organizing the November 5th mixed mixer and the November 6th event with comedian Kate Rigg.
We would also like to thank the following DEPAUL UNIVERSITY units for their generous co-sponsorship:
African &Black Diaspora Studies
American Studies
Art, Media, & Design
Center for Latino Research
College of Liberal Arts & Sciences
LGBTQ Studies
Office of Institutional Diversity and Equity - President’s Signature Series  - especially ELIZABETH ORTIZ and MIRANDA STANDBERRY-WALLACE
The Society of Vincent de Paul Professors
Women’s and Gender Studies
Women’s Center
SPECIAL THANKS to all the other individuals who helped organize CMRS 2010. Thanks to SANDRA FRANCO for her amazing logo design and for creating a graphic design identity for CMRS, JENNIFER MANGUINO of Broughton Hotels for shuttle services and delightful accommodations at the Willows, City Suites, and the Majestic Hotels. None of this would have been possible without the assistance of faculty and staff across DePaul including: ASTRA STEPHENS and the staff of the Student Center; LINDA GRECO from DePaul’s Liberal Arts & Sciences Dean’s Office for creating the CMRS 2010 website; WEN-DER LIN and the staff of Information Services; AISLINN CALLAHAN-BRANDT of Parking Services; MARK GOLDBERG-FOSS and the staff of the DePaul Bookstore; and ELIZABETH SOSA and the staff of Chartwells Catering Services.
Posted by Unknown at 2:16 PM